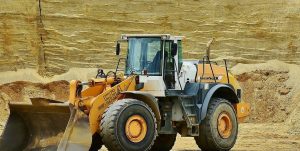 Howard Mc Allister, a researcher at the University of Hawaii, estimated that the number of sand grains at all the world’s beaches count to around 7.5 quintillions or 7.5 billion billions. I have no idea if this number is correct and even if it sounds a lot, sand is a resource, which is an essential part of everybodies life. In his book “The world in a grain” the author Vince Beiser explains the importance of sand for our modern industry and society.

The book describes the increasing dependence on sand in (nearly) all of our areas of life, although the start of this “success” story was slow.
At the end of the 19th century, concrete (enormous amounts of sand are required to produce it) started its journey from England via France to America. After a laborious start, his successful story started in 1906 right after the earthquake in San Francisco. A single concrete building, that survived this quake undamaged, became the unrestricted advertising symbol for this material, despite the fact that some brick houses also survived. This earthquake made it possible for concrete becoming the number one material of modern architecture. To be mentioned: the Panama Canal, the Hoover Dam, the Guggenheim Museum in New York and countless Bauhaus buildings.

Further on, one of the first sand demanding projects was the Interstate project in the United States, which was at that time the biggest public project in US history. In 1904 the United States had a grand total of 141 miles of paved roads (not counting city streets). If you wanted to move lots of people or large quantities of goods any significant distance, you did it via water or railroads. That could not last in a country where everyone suddenly wanted a car. But a car without pavement is like a pair of skis without snow. The ascent and ultimate dominance of the auto required the deployment of vast legions of sand. Dwight D. Eisenhower, who in 1919 joined a disastrous military truck convoy, crossing the country from coast to coast on poor or non-existent roads, was elected president in 1952. Driven by this frustrating experience he did everything to realize the Interstate Highway system. Today we are talking about 2.7 million miles of paved routes in the U.S. (runways, parking-places, swimming-pools ….)

Obviously concrete is not the only driver for the increasing demand for sand. Modern architecture as well as many other industrial branches are big consumers of glass, which basically is also produced from sand. On top of that, the high-tech industry uses a lot of silicium, which is also – surprisingly – based on sand.

The following chapter focuses on the development of artificial islands, where the various projects in Dubai are well-known, but actually they are not the only activities in that field. According to a study by Deltares, a Dutch research group, since 1985 human beings created more than 15000 square kilometres.

In many of the described examples it is not only about serious business, but also about crime, where people were killed for …
So, whoever is interested to read more details and to learn more about this very important resource is welcome to read Vince Beiser’s book.

PS: Here you can find another interesting article about this topic: Demand for Sand: the largest mining industry no one talks about

PPS: And just to be clear: I don’t get any commission from Amazon or anybody else for this review.