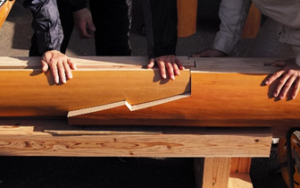 Ways to recognize the Nature

“ Remarkably, there is evidence that modern Asians also tend to see the world as consisting of continuous substances, whereas modern Westerner are more prone to see objects.“

This is one of a sentence extracted from [1]. The book also mentions the difference in the way Americans and Japanese recognize objects and says that, through certain experiments, Japanese are more likely to identify objects through „substances“(material) and their relations to their surroundings.

From ancient times, Japan has had a belief that all beings have been given a sense of life. They have not placed a hierarchy between nature and have set themselves down in the same part of the world. In other words, more than interpreting nature objectively, they were used to capture the „substances“. This integrated perspective, in which to have no hierarchy between nature, tends to remain when they treat timbers in architecture and even in nowadays has evolved in various forms as unique skills.

Traditional Japanese wooden technology is well known for the details of joints and fittings, so-called “Tsugite” and “Shiguchi” Tsugite is the name of joints for beams and Schiguchi for Column. At the end of the 1980s, a book of joints and fittings was published by Gengo Matsui entitled „Wood Joints in Classical Japanese Architecture“. These systems are well known to create an “ interlocking joinery“ with successfully combining physical properties such as “ Bearing Force“ (1. Parallel to fiber 2. Perpendicular to the grain) and „Shear force“. The Geometry is carefully controlled to achieve adequate performance on each joint. For example, by taking advantage of the anisotropic character of wood, joints which are based on the “ Bearing Force perpendicular to grain“ works to resist seismic loading (see below). Joints between column-beam are called crosspiece joint (Nuki-joint, Fig.1-1) and joints between column-foundation are called embedded-column base joint (Hottate-Bashira, Fig.1-2).

However, due to the slippage on the contact surface, there is a time lag before the mechanism of embedding occurs, and this can cause a decrease of initial stiffness, which might not be accepted to satisfy the clearance required for facades. Therefore, it is normally desired to be integrated with a highly rigid element such as „tilt stability of columns“ or „mud walls“ to compensate for the initial stiffness. It could, however, be designed without these reinforcements when those risks have been removed in advance. For instance, in GIFU ACADEMY OF FOREST SCIENCE AND CULTURE abundance of this “Nuki” mechanism (Fig.2) has been utilized. The structural joinery system not only works effectively against seismic load but also matches perfectly with the concept of the design. 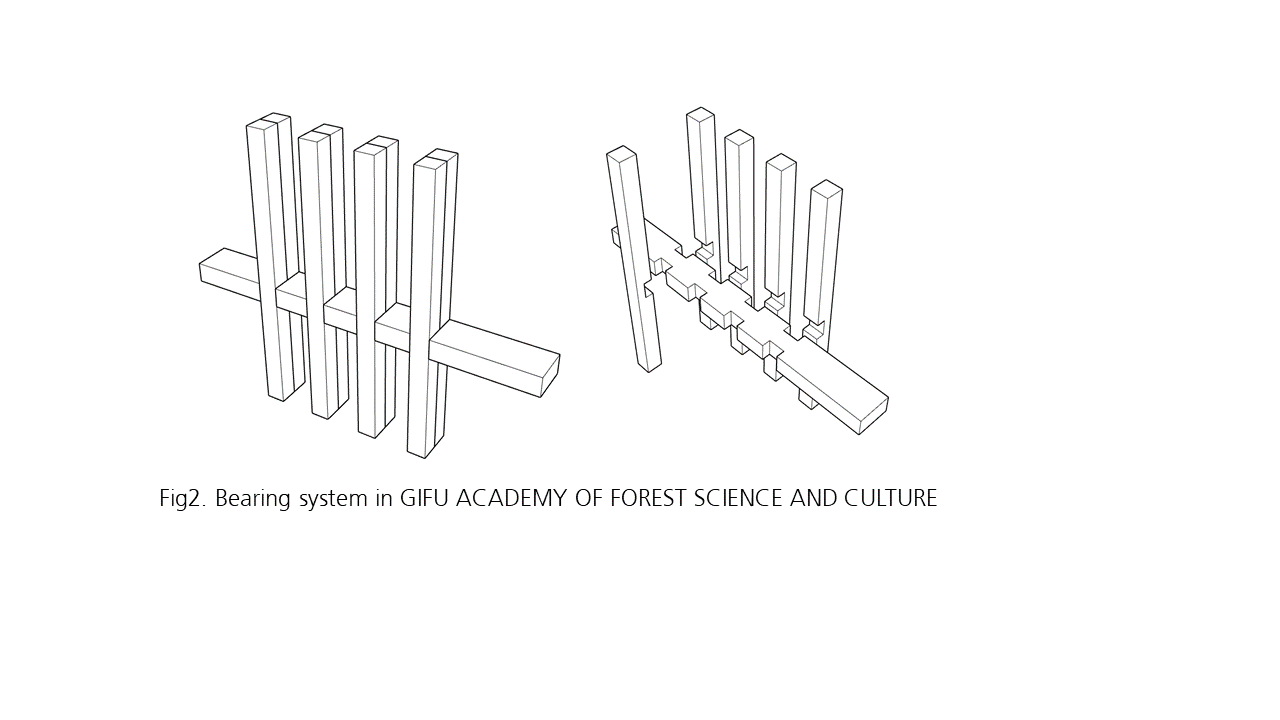 Another good example is MINAMI OGUNI TOWN HALL (structural design by YSD) which the “embedded column-base” has been utilized. 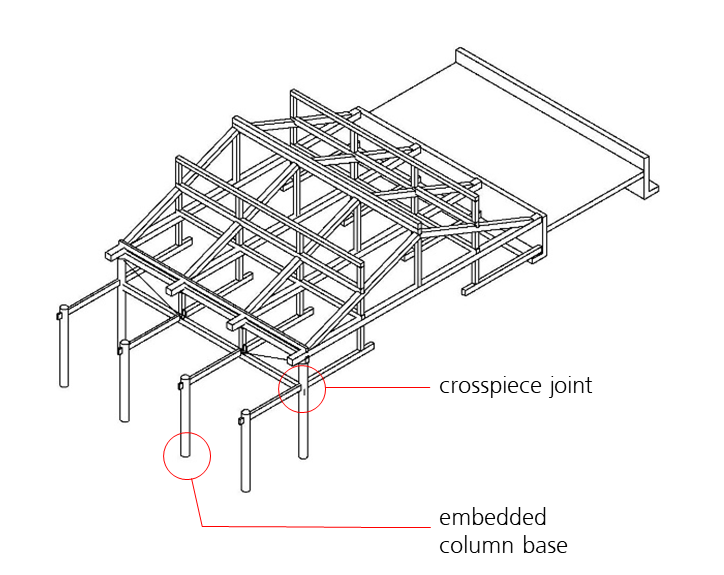 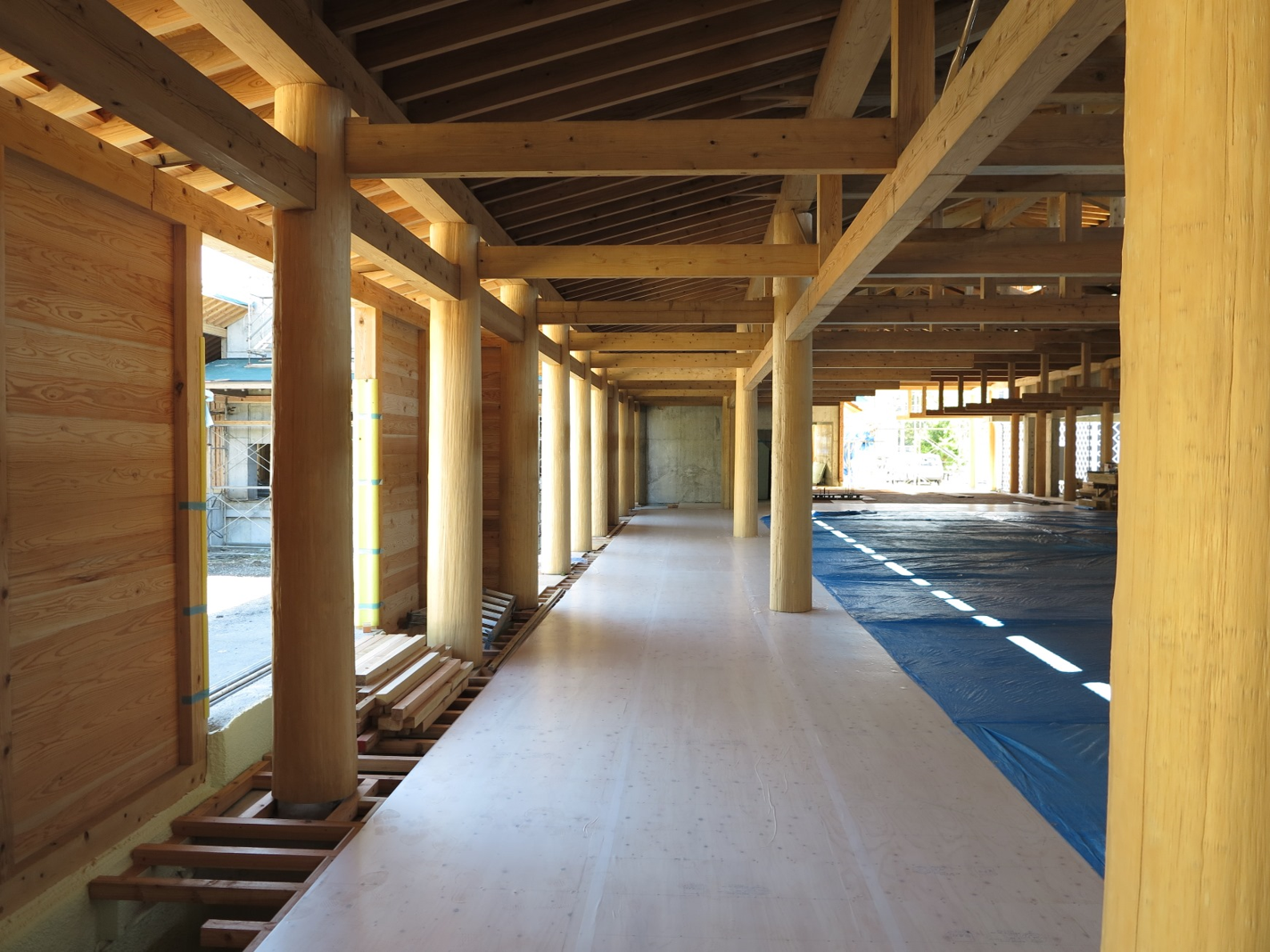 Fig. 3-2. Embedded Column Base during the construction 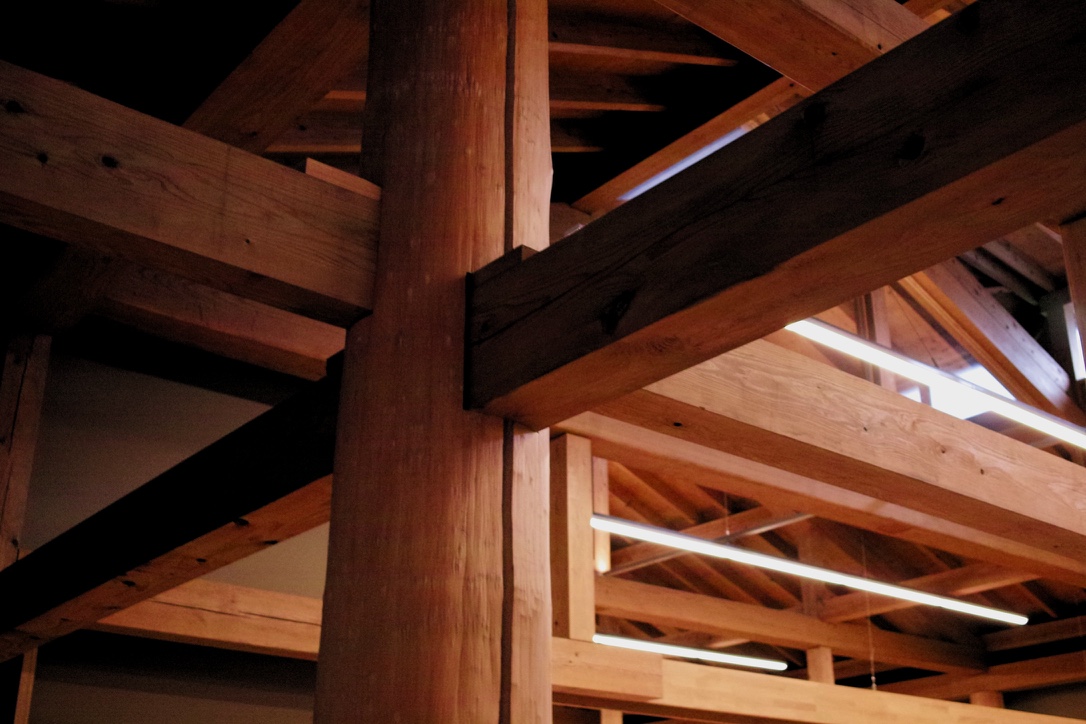 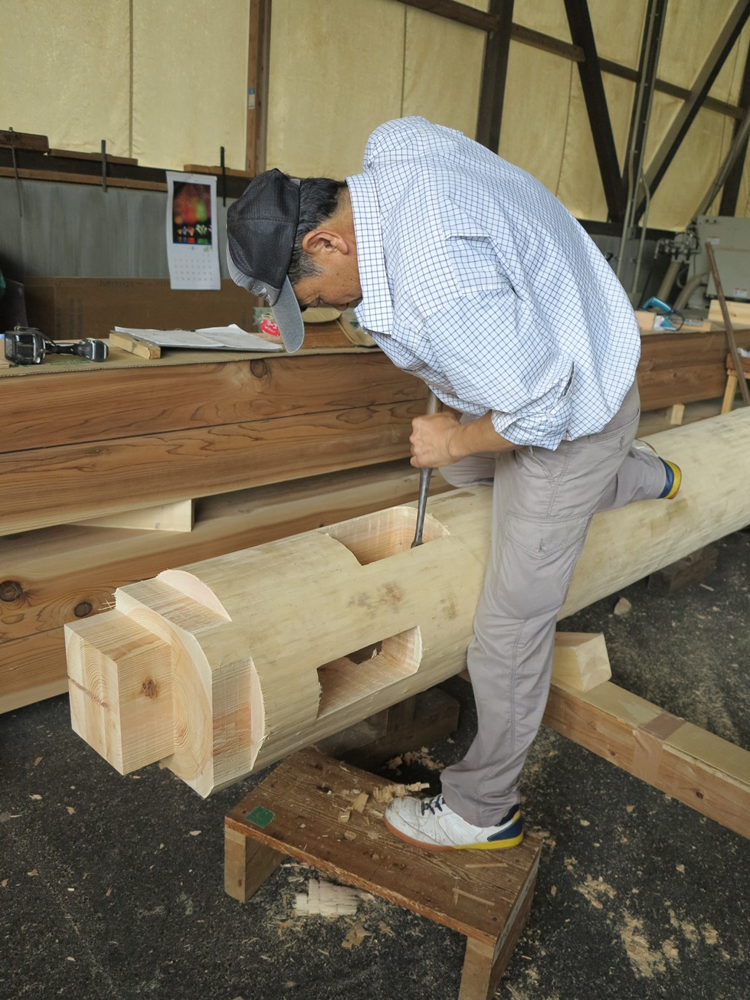 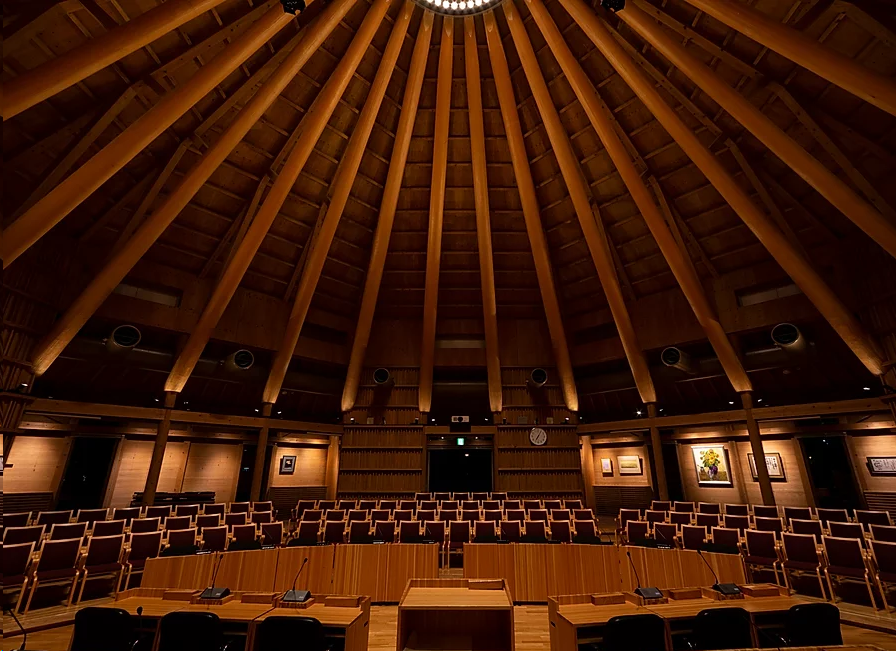 Also, there are the Daimochi joint, the Okkake-Daisen joint which is applied mainly in a part to carry shear forces and bending moment, respectively. 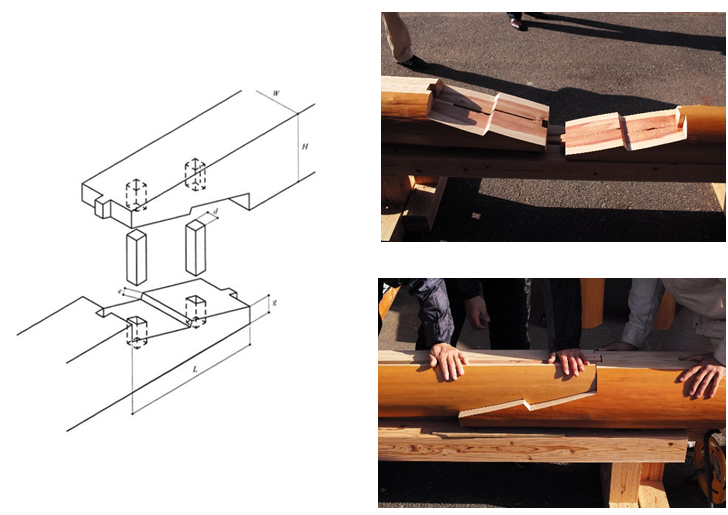 A joint applied in an area mainly to resist shear forces. The cross-section of the shear-forced area can be almost fully utilized. This is an effective geometry since the end shear strength of the wooden beam is well known to be significantly reduced by a notch

A joint mostly utilized in a part to carry the bending moment. Resist to bending with a Bearing force parallel to the grin in each nailed area.

In follow would be introduced a project, which are designed with the utilization of traditional Japanese joints. 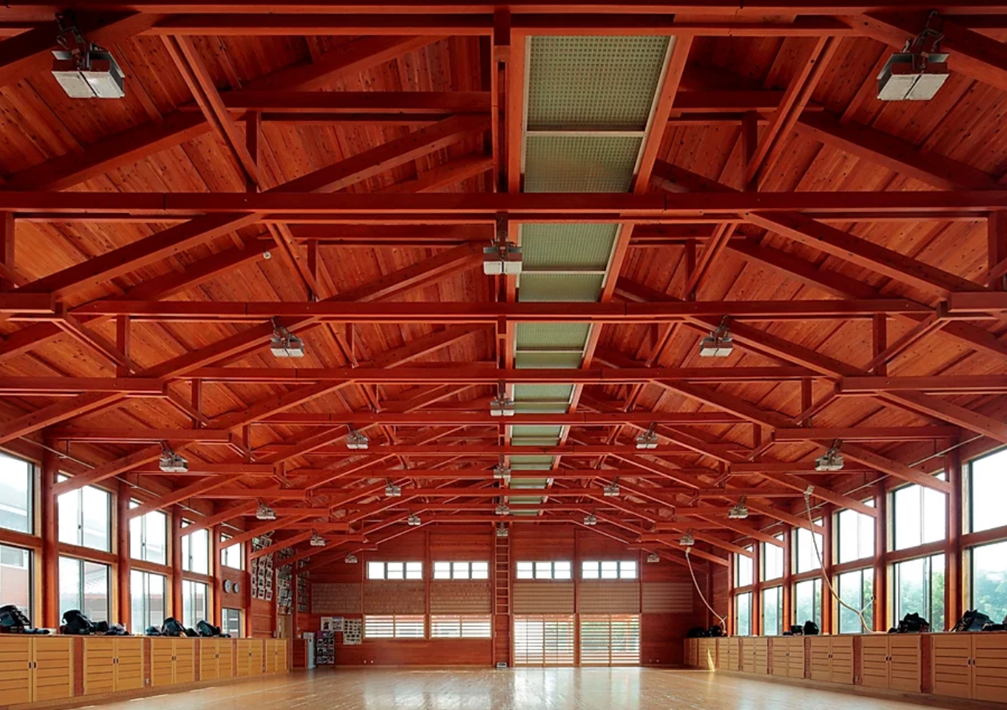 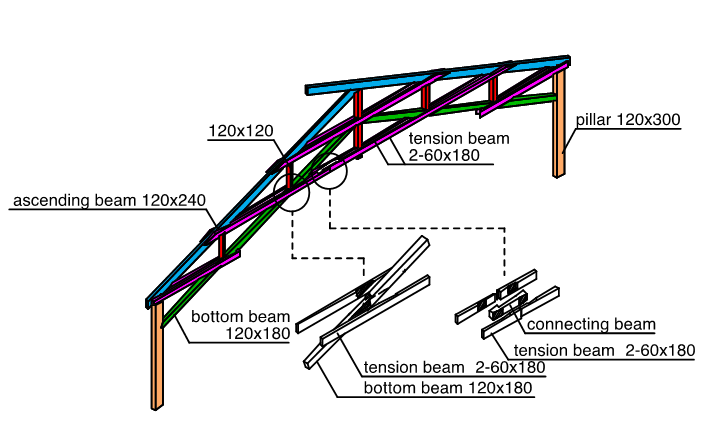 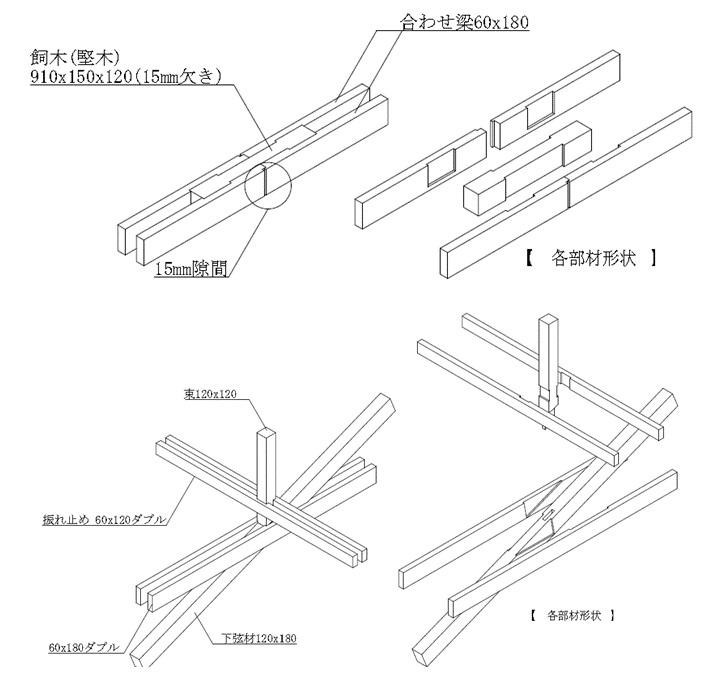 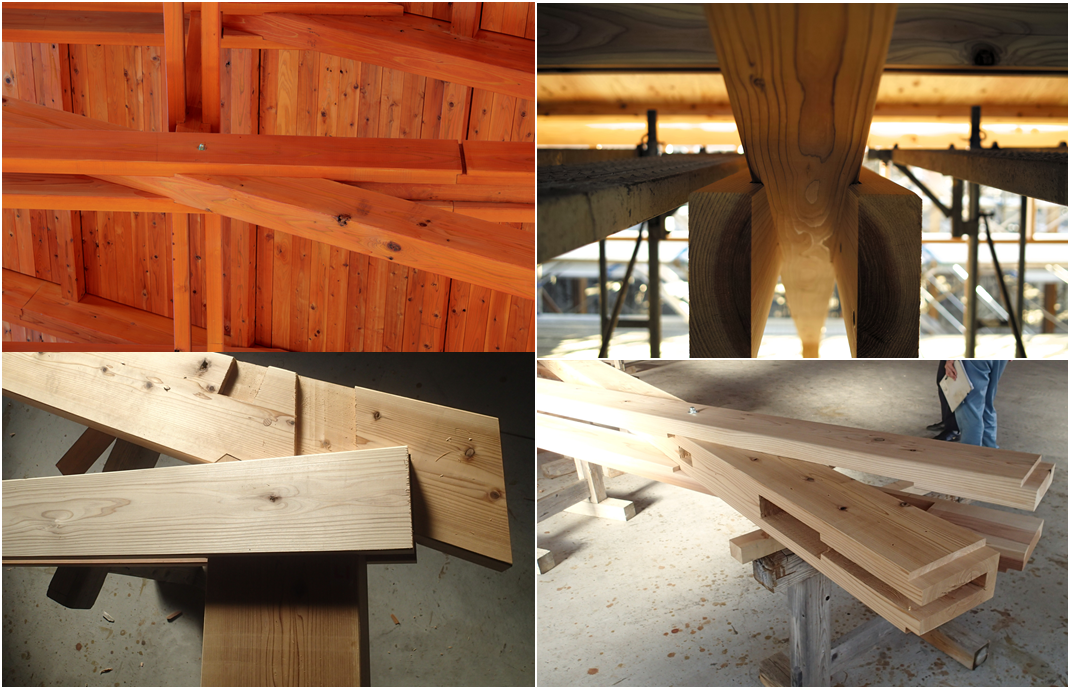 Why use such a complicated joint that requires complex machining in the first place? It sits on the idea of regarding nature as something alive, in this case, the idea is to understand the substances of wood. Wood is a material that cracks and deforms due to drying shrinkage and creep, so it moves over time. The feature of this joint system is to assume that „movement“ naturally comes up and to accept it in a certain level. We use interlocking joinery since the woods comply in harmony with each other and therefore try to confine the amount of foreign material, like steel. It’s more the idea of „coexisting“ or „accompanying“ than „controlling“ or „dominating.

This idea of coexistence is not limited to the joint. In all of the aforementioned cases, sufficient workshops were held in advance at the site to figure out and understand standard length of locally sourced trees , sizes, species and any other characteristics which the tree possess. And also the performance of the CNC processing machine. The structural plan is built based on this research. It’s a passive approach, but it enables it to design under local circumstances. Traditional joining can be adopted for buildings up to a certain scale as long as the wood processing is accurate.

Encouraging locals to participate and designing with locally sourced materials will not only promote the circulation of forests in the area, but will also enable the architecture to be loved and carefully maintained. Which we might could say as another type of sustainability.

[1] The Geography of Thought: How Asians and Westerners Think Differently…and Why, Richard Nisbett Ph.D. | 1. April 2004